Charley's Aunt has had two previous presentations in this theatre. December 1950 and May 1953

Full page "Pen Portrait - Christopher Marlowe" (Cast member) who started out in hairdressing, moving on to the Theatre, touring with musical revivals such as "Desert Song" and "The Boy Friend". Most recently "Calamity Jane" with Barbara Windsor. Chris has featured in many TV shows, he "doubled" for Jon Pertwee in "Worzel Gummidge" (doing all the dangerous bits). This is Chris's first season of straight repertory.

This was a general programme 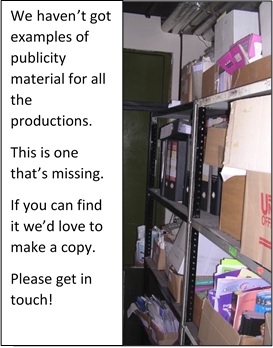